Compared to Bitcoin, Monero is not widely accepted by retail shops, or online stores around the world since BTC has had a lifespan of over a decade and is far more popular. However, the advantage with Monero lies in that it is based on an obscure algorithm and its transactions, as well as the identity of sender and receiver, cannot be traced. Which is why, Monero has replaced Bitcoin as the numero uno crypto on the Darknet. While using Monero (XMR) guarantees that transactions have the highest level of confidentiality, you may also want to convert Monero to Bitcoin for diversifying your portfolio.

Monero is often cited as a notorious cousin of Bitcoin courtesy its rapidly increasing adoption for unscrupulous activities. Not surprisingly, Monero is under the radar of law enforcement agencies. So, if you are one of the many XMR users who wish to mitigate the risk by converting Monero to other cryptocurrencies such as BTC, you are at the right place.

There are many Monero exchanges that can convert Monero to Bitcoin albeit with high fees. There is a boatload of cryptocurrency exchanges that will allow you to use their BTC to XMR converter. Let’s dig into them. 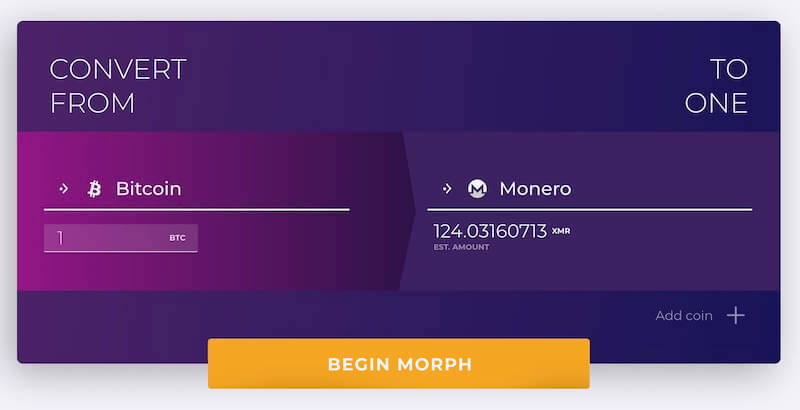 The name speaks for itself – a service that morphs your crypto to another, in this case Monero to BTC or vice-versa. MorphToken is handy because you simply have to pay with fiat and/or other crypto. Most cryptocurrency exchanges such as MorphToken do not require your personal data, and they can be used without registration anonymously.

Changelly is a popular worldwide crypto exchange that can easily convert  XMR to BTC within a few clicks. It is one of the fastest and easiest cryptocurrency exchanges out there that comes with a XMR / BTC currency pair online converter. While the mining fees is low compared to other exchanges, Changelly does require a higher volume threshold to convert Monero to Bitcoin.

Changelly offers two types of exchange rates: Fixed and Floating exchange rate. With fixed rate, you pay a standard amount and with Floating rates, the amount changes based upon volatile market conditions. In our experience, using Fixed rate works best on Changelly as users don’t end up paying extra Moneroj.

Rounding off our list is ChangeNow which is a formidable crypto exchange that comes in handy for not just exchanging Monero (XMR) to Bitcoin (BTC) but any other cryptocurrency. It includes Network fees and all other exchange charges within the rate and “guarantee no extra costs.”

However, bear in mind that the minimum amount threshold to convert XMR to BTC is around 0.04 XMR currently. So, if you want to exchange smaller volumes of Monero for online purchases via BTC, ChangeNow might not fit into your scheme of things.

Why is there a difference in exchange rates between various exchanges?

First off, most exchanges have their own terms and conditions.  For instance, Exchange A may offer a low rate for its services, but there is an additional commission involved. Or, the exchange rate is not fixed at the time of conversion, and the minimum conversion amount is at least 0.5 BTC.

On the other hand, Exchange B might accrue a higher exchange rate which is fixed (hence no surprising charges) with no additional commissions, and/or you can buy from 0.1 BTC onwards.

How to choose the Best Monero to Bitcoin Exchange?

Please ensure to weigh in the pros and cons, deduce results based upon exchange rate calculations and choose the best Monero to BTC exchange that is profitable and best bang for buck. Also, if you are just starting out, it is better to work only with trusted services, and convert Monero to Bitcoin (BTC) free of hassles.